konferksop (Kupulehono)
Greetings Guest
Like making multiple langs?
Donate now to increase your lang cap!*
(*from "unlimited" to "unlimited PRO")
[donate]
home > library > journal > view_article
« Back to Articles » Journal
All about flags
▲
6▲ 6 ▼ 0
Stuff about flags that you might want to know
This public article was written by Admin Sheep, and last updated on 19 May 2020, 18:01.

So you're here to learn about flags! This article will cover the basic flag designs found in real-world flags (and are available under the flag info pages), and some good tips for flag design.


[top]Some tips
Designing a flag is a fun challenge. If you find this difficult, we'll give you some tips here to help make your flags not suck :)

Shape and size
First thing to consider is the shape and size of your flag. Most real world flags of sovereign nations are rectangular. There are of course exceptions, such as the square flag of Switzerland, or the oddly shaped flag of Nepal. You can pretty much have it any shape you want, however you must remember that the left-hand side of the obverse (front) of a flag should be straight. This is so that it can be easily fixed to poles and flown. Not much point in a flag you can't fly!

Secondly, the size - or rather proportions or ratio - should be important to consider. The most common proportions are 4:3, 2:1, and 3:2 (where the first number is the width relative to the second number: height). Again, you can make this anything you want however.

Colours
Colours are probably the most memorable part of a flag in some cases, so it's good to pick colours that will work. The first thing to take care of is not picking too many colours (excluding any emblems etc) as this complicates the flag and can make it less recognisable.

One thing to also consider when picking the colours is the culture of the people it represents. The colours must be important to them, and should mean something to the culture. Also consider that when the flag was invented in your culture's timeline, what colours were available to them? What colours were largely in the environment around them? Were they able to produce certain colours (ie. dyes etc)?

Lastly, and pretty importantly, contrast. Pick colours that will contrast together very well, and place them accordingly on the flag. For example, a half black, half white flag contrast incredible well, while a half purple, half red flag do not. This is important as a flag should be recognisable from a distance, and colours that do not contrast well will not be recognisable; or possibly even visible.

Emblems/Charges/Badges
These are things like coat of arms, animals, people, writing etc that are used on your flag. These are good to use if it adds meaning to the flag (such as something that it important to the culture), but don't overdo it. You want the rest of your flag to be noticeable also. Furthermore, it's always good when people are easily able to draw a flag themselves, and don't have to try and draw complicated images as well.

Here's a helpful graphic to demonstrate some of the principles covered: 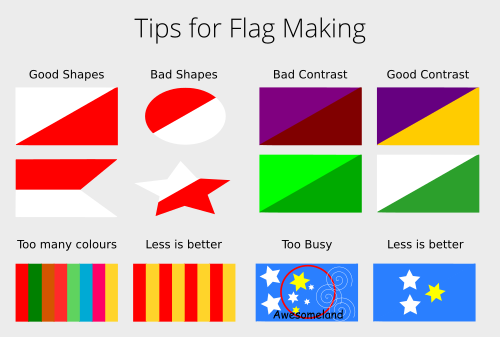 [top]Designs
The below table shows you the basic design patterns that a lot of flags use. Given are some real world examples also.

I actually think kinda the same, but it seems that many conlangers design flags for their conpeoples anyways, and it might also be a good(though by no means not the only) way to facilitate users to distinguish different languages and peoples/cultures, and flags seem to exist in a wide variety of cultures(at least Eurasian ones) in our world and has become a standard way to symbolise a group of people, and I think that’s why CWS provides the function for conlang flags. Also, I guess one can update something that is not actually a flag but some sorts of pictorial symbols of a conculture, and it is said that all cultures have some sorts of symbolisms. But yeah, I think your doubts are reasonable, there have been cultures that did not use the flag, but there have been no cultures that did not have some forms of symbolism, from what I have learned.

[link] [quote] 03-Sep-21 00:48
✱ConlangerCWS Conlanger
Azdaema
Why does CWS just takes it as a given that every con-culture has a flag?

My con-people aren't tumblr teens. They don't have a flag.

And beyond that, CWS assumes that everyone has a very narrow *sort* of flag: the sort that would blend in at the modern Olympics. Not a medieval banner, longer than it is tall, a la Game of Thrones. Not a Turkic tuğ. Not a figurine on a stick, like the Roman aquila.